Vanity is getting to Bin Laden

I had a welcome break from it all in Germany over the post-Christmas week. As usual when I take my eye off things the world goes crazy.

I was at an Esperanto get-together in Dusseldorf, attended by 160 people from 22 countries. I took the opportunity to show the film 'ZERO: an investigation into 9/11'. There were only 17 at the presentation,because there was an unusually full programme, but it went down really well. There was also a write-up in the programme booklet - a translation of the standard blurb. Something bizarre had happened on the subtitling,so I just explained that that's perfectly normal in 9/11 truth activities, and proceeded to do a simultaneous interpretation. I also presented a lecture/piano recital, and as part of that presented a six-part composition called 'The Aftermath'(Ground Zero, In Memoriam,The Dawning, Reopen 9/11, Guantanamo, Lament). That went down well, too. I talked to a lot of people about it. Out of 160 people from 22 countries, no-one said I was crazy. What a long way we've come since I woke up to this in December 2006! I explained to people that my main interest in this is the psychology of Western propaganda. They couldn't have kept something like that quiet for so long without preexisting structures. People are now beginning to see the common elements of that and the British problems in the Esperanto movement. No-one called me crazy on that issue either :-) Talking of Esperanto, it's listed in the top 25 ideas on Barak Obama's change.org website at http://www.change.org/ideas . I doubt whether anything will happen on this. My interest lies in the idea of democratic relations between nations,and the Esperanto idea is the language part of that.

Will Obama bring about the change that so many aspire to?

Some people have doubts. Historian Webster Tarpley, who seems to be a prolific mine of information, has written a new book called 'The Post-modern Coup" 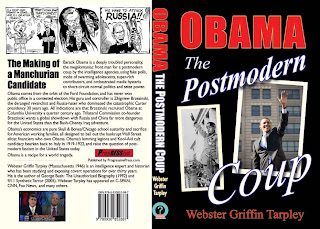 Meanwhile, the truth on 9/11 continues to seep out. There's a film out called "Rescue me" about a 9/11 ladder fire service. Daniel Sunjata is a 9/11 truth advocate and managed to get his opinion on 9/11 into one of the episodes:

We need to get it shown in the UK. There's also a new false flag drama called Body of Lies and a Bollywood film just shown in London called Shoot on Sight.

On the civil liberties front, there are reports of people being stopped by the police from taking pictures in public places. Yet whenever there is an event, the police appeal to the public for videos (see here) .

As the world awaits the closure of the Guantanamo concentration camp,the Bush administration admits there was torture

There are also stories, as usual, which look like planted disinformation. Osama bin Laden is now reduced to audio tape, since images of his face have been so controversial:

There's a new book out today called 'The Assault on Liberty':

"Britain is a country where the state persecutes shop keepers who sellin pounds and ounces, but allows murderers to use the Human Rights Actto kill again; where law-abiding citizens are spied on, but teachers are frightened to discipline violent children. With literary verve and philosophical insight, Dominic Raab tears into a justice system which has turned Britain’s liberal values upside down. A book that could make Gordon Brown vote Tory."

This statue, made of cast iron and weighing 16 tons, is situated in the town of Reading, Berkshire. The inscription reads:

This monument records the names and commemorates the valour and devotion of XI (11) officers and CCCXVIII (318) non-commissioned officers and men of the LXVI (66th) Berkshire Regiment who gave their lives for their country at Girishk Maiwand and Kandahar and during the Afghan Campaign MDCCCLXXIX (1879) - MDCCCLXXX (1880).

"History does not afford any grander or finer instance of gallantry and devotion to Queen and country than that displayed by the LXVI Regiment at the Battle of Maiwand on the XXVII (27th) July MDCCCLXXX (1880)."

This blog has been set up to publish regular newsletters in conjunction with the Berkshire 9/11 Truth website. The newsletters are on current issues as well as offering opinions on media articles both in the UK and abroad.